Start building your own mental wellness plan with the ACT MATRIX.

From an evolutionary perspective, the primary role of the human brain is to keep us safe. Our brain evolved in times where physical or social threats often had life-or-death consequences. When scanning the past or anticipating the future, we developed an 80% negative bias to best avoid harm and support survival, but not necessarily to thrive and become the best version of ourselves. Despite thousands of years of evolution, our brain still reacts to threats in the same way, even if perceived threats are much less destructive than they were in the past. From tigers and hunger, our modern-day threats now include colleagues ignoring our comments in a meeting, being late to daycare, losing benefits at work, not being able to see family and the like.

Our primitive or mammalian brain, called the limbic system, is highly efficient to protect us from perceived threats. It has learnt to either fight, flight or freeze depending on the context and your conditioned responses.

When we feel threatened, the mammalian brain kicks in, often with inappropriate, self-preservation reactions that we later regret as they alleviate the short term discomfort or generate an immediate reward, but do not necessarily take into consideration what is most important to us in time or align to our deepest values. Rather, the brain is wired with these learnt behaviours from the past and will often repeat them again and again, just because they feel most natural to us, even if they no longer serve us.

We may often react automatically in a way that we later regret, if we were not able to manage our emotions to better utilize our more mature, wiser brain called the prefrontal cortex (PFC).

To access our more mature, wiser brain (the PFC), we need to take note of our limiting beliefs, fears and related mental models that are keeping us stuck in a place that no longer serves us, and redirect our responses towards what is most important to us. This is what ACT (Acceptance and Commitment Training) allows us to do: by noticing the unconscious patterns, we can make a conscious choice about our preferred responses, which will move us towards more expansive and constructive habits and behaviours. ACT uses evidence-based interventions grounded in mindfulness to increase mental and emotional skills for handling the difficulties that inevitably arise from life. Mindfulness is at the very root of this foundation as it is one of the catalysts for well-being. We explain more about our approach to the development of a healthier mind and the role of mindfulness in our article “Supporting healthy performance: Four pillars of well-being.”

With that in mind, we use a matrix adapted from ACT: 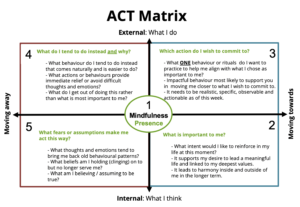 All day long, we’re either doing what we call “towards moves” or “away moves.”

TOWARDS MOVES refer to responding according to our values and behaviours, which will lead us towards what really matters to us, expanding our potential for having a rich and meaningful life.

AWAY MOVES refer to reacting with often unconscious and conditioned beliefs, thoughts, emotions that lead to behavioural choices that keep us at bay from whom we really want to be.

The less aware we are of what is driving our choices, the easier it is to lose sight of what really matters — and the more we get stuck and move away from what we really want and need for a thriving life.

A more meaningful and fulfilling life begins with clarifying what is important to us, learning how to mindfully disengage from habitual thoughts and behaviours that take us away from what’s important and choosing moves that lead us in a healthy direction.

Now, you can draw a blank ACT Matrix on a piece of paper and fill it up to start building your own mental wellness plan.