To support the Mindspace Podcast:

You can listen and subscribe to the podcast here:

And you can watch the full interview here

“Psychedelics open things up and create opportunity. And integration is the work you do after to make sure you derive benefit from that experience.”

In this episode of the Mindspace podcast, Dr. Joe speaks with Andrew Rose, a very experienced practitioner in Psychedelic Harm Reduction and Integration (PHRI). He is a certified mindfulness teacher, formerly the director of programming and digital strategy at Mindspace, and currently the director of programming and content at Numinus. He now leads the PHRI program at Numinus.

He is also an assisting trainer at Fluence, an organization that offers educational programs in psychedelic integration and psychedelic-assisted therapy.

He also co-runs a community organization called Plant Parenthood, a digital community of parents who are interested in the intersection of family and the intentional therapeutic use of psychedelics.

Andrew and Dr. Joe spoke about:

Note: At 23:30 of this episode, Dr. Joe mentions a study conducted by Dr. Robin Carhart-Harris and his colleagues. The below image is what Dr. Joe was speaking about in relation to the study. It shows the connections between various brain regions when subjects were given a placebo (figure a) and when subjects were given psilocybin (figure b). The whole study can be found here. 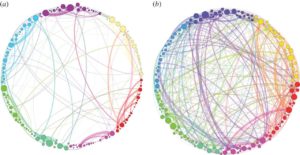 Here are some highlights from their conversation:

It’s interesting because a lot of people are hearing about psychedelics because of the clinical trials. And the clinical trials sound like your typical drug discovery process. There’s a new medication for mental health issues, and you take this medication and then something happens in the middle there. Then a significant number of people feel better, like two thirds of people no longer meet the criteria for PTSD, for example. So what is it about? It’s not as simple as just tweaking some knobs in your brain chemistry and you feel better.

When we talk about psychedelics as a catalyst for creating freedom, what does that mean?

Maybe that’s kind of an obtuse way to answer your question. But things are not these little discrete, isolated machines that you can go in and tweak a knob and then you leave it. Everything is connected to everything else somehow.

Yes, maybe this is a good way to sort of approach like what I see happening in the psychedelic experience. It can be useful to frame it in terms of thinking about why a lot of people do come to it who are looking for relief. The clinical trials are exploring how to heal or solve obvious issues or problems. That are, like I mentioned before, things like depression, anxiety, PTSD. So one of the ways to think about all of those issues and–I’m not the first to point this out–is to conceive of them as kind of forms of rigidity or sort of like a fixated way of viewing and relating to the world. So you’re kind of stuck in a pretty narrow box and feel a little bit trapped.

So with depression, you are kind of ruminating and stuck in a particular narrative, something that’s happened to you in the past or in a current situation. You don’t feel like there’s any way out. Addiction similarly. Like repeating the same behaviours, even though it’s sort of increasingly doing damage to your life or in a way that is problematic for you.

So all of these kinds of afflictions have that similar flavour. And I’m not a neuroscientist, but as far as I understand, the kind of neurological associations with these conditions kind of tend to reflect that.

I’ll just say we’ve had Judson Brewer on the podcast and he’s done an amazing job of articulating the neurobiological processes behind addictions to substances like cigarettes or cocaine or even food. And also that similar mechanisms are in place accounting for internalizing problems like anxiety and mood problems. It’s all this stickiness or this tendency to lock into patterns, some of which are unhealthy. And we just get stuck in these feedback loops. So there is a tendency in our brain to sort of fade into order and sometimes too much order of some kind.

Correct. So too much order. Too much structure. Too narrow.

So what psychedelics do or can do–and it’s worth mentioning, it’s not just psychedelics, but other altered or non-ordinary states of consciousness that can be achieved by various other means. We can talk about some of that a little bit later. They really open the system up. So they create connections between parts of the brain that don’t typically converse or may not have conversed since early childhood or since a traumatic experience, for example.

So things get–when we’re stuck or things are narrow. Things have been really compartmentalized in our internal system. Psychedelics just open that system up. They don’t necessarily rewire and fix the system.

Because what does fix mean? Do we have an actual conventional sense of like this is healthy, this is well, this is fixed. This is in balance and this is unwell. It’s easier to say, ‘Okay, well, this is unwell because I’m suffering. This hurts.’ But even then, there are forms of suffering that may just be part of the human experience that can’t really be, quote unquote, fixed. So it’s another nuance there that maybe we can go into later.

So psychedelics really open the system up and create the opportunity for new connections to be made. To be able to see things in new ways and see solutions to problems that didn’t seem to be there before. And, yes, that’s really what we’re talking about. We’re sort of opening the system up. But that’s just kind of the start, right? Once the system is opened up, then what? Then what do you do?

So I think it’s Robin Carhart-Harris’s work that shows the connections among various brain regions in a brain that is on placebo. And there is a small number of connections, some of which are quite thick, representing a sort of neural highway where a lot of information passes. And then a brain that’s under the influence of psilocybin, where there are very few of those neural highways and tons and tons and tons of thinner connections between brain regions that haven’t been communicating before.

So it’s not just a metaphor. This is what is actually happening in your brain, changing the way regions in the brain connect to each other. So all this potential, all this freedom, all this flexibility.

You’re making me think of a city or a community whose outer reaches, which have been kind of destroyed because there’s a couple superhighways that have been just placed in there. And then there’s this concentrated downtown core that’s really frenzied and then this impoverished, kind of outer region. And then someone does some, I don’t know, progressive remodelling of the infrastructure of the community. And it’s like, ‘no, a lot less cars, more bike paths.’